skip to main | skip to sidebar

Got out for another winter hike recently.  And, as it turned out, it was my last chance.  The weather since then has been warm and spring-like.  I went with my hiking buddy Chris, who suggested the location, a short hike along the Black Forest Trail.  Friday was cold but sunny and we were treated to nice views. 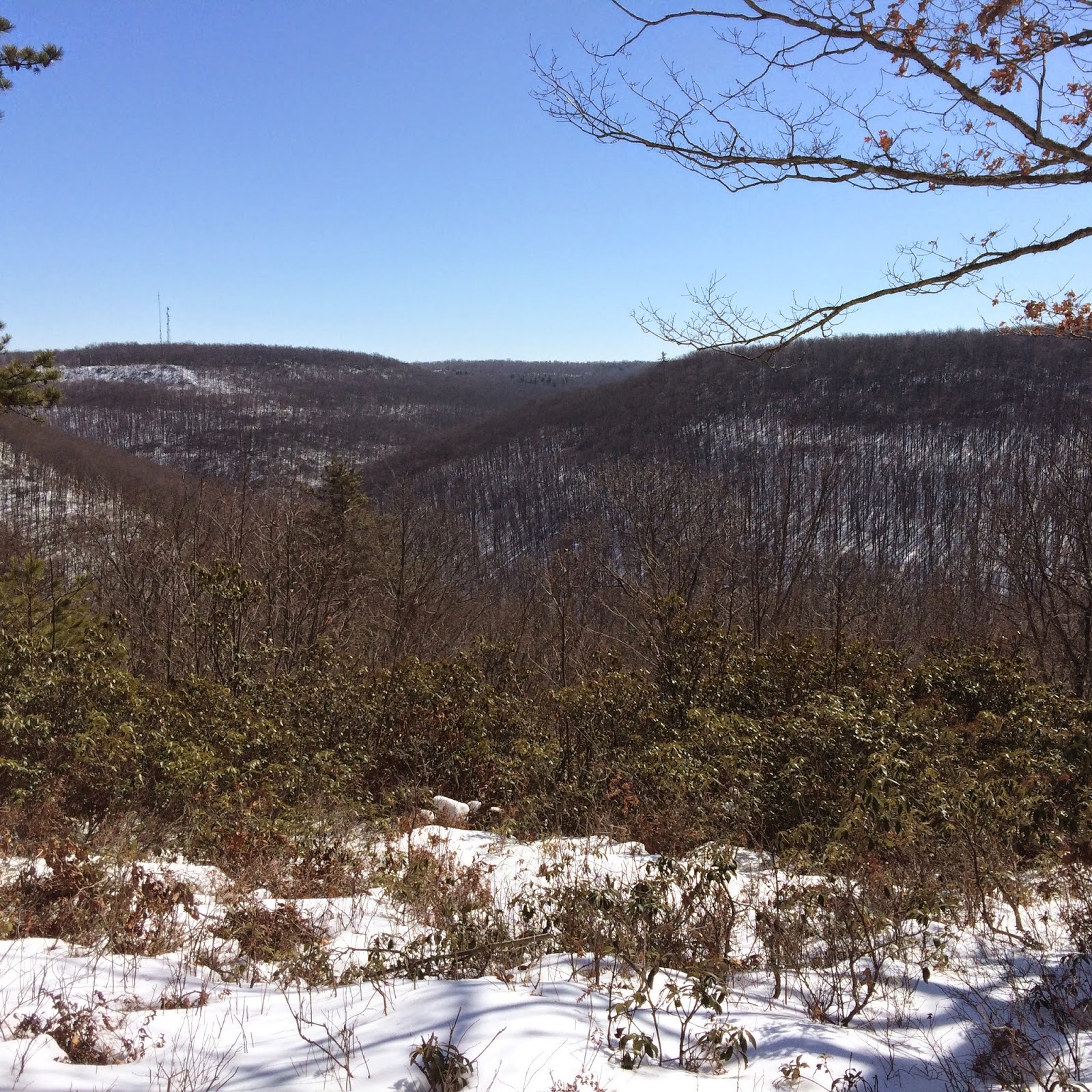 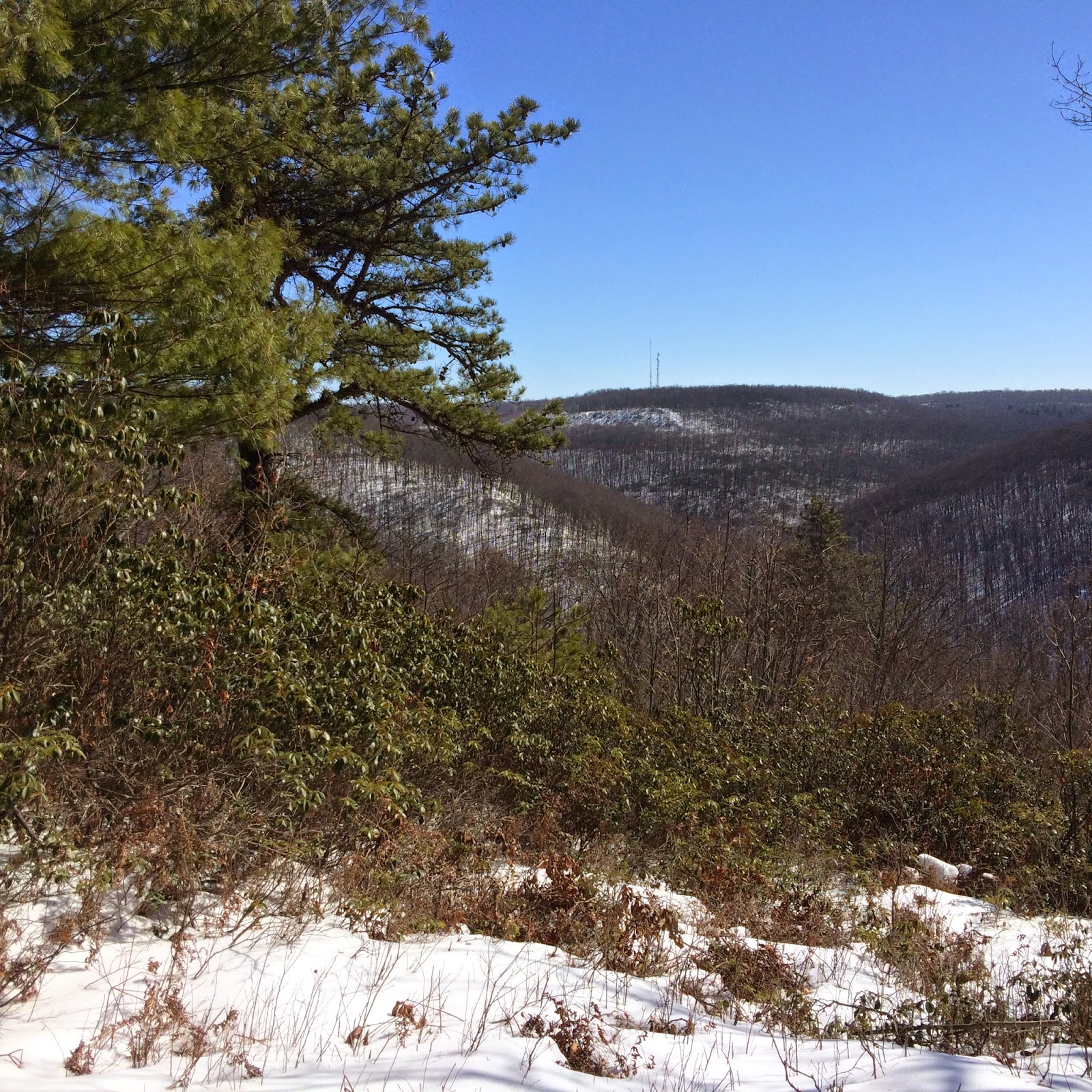 There was about 2 feet of snow on the ground and so we used snowshoes.  They didn't help as much as you would think because the weather this year has been so cold.  There was a crust of ice on top and the snow underneath was very dry.  Even with the snowshoes it was like walking on sugar. 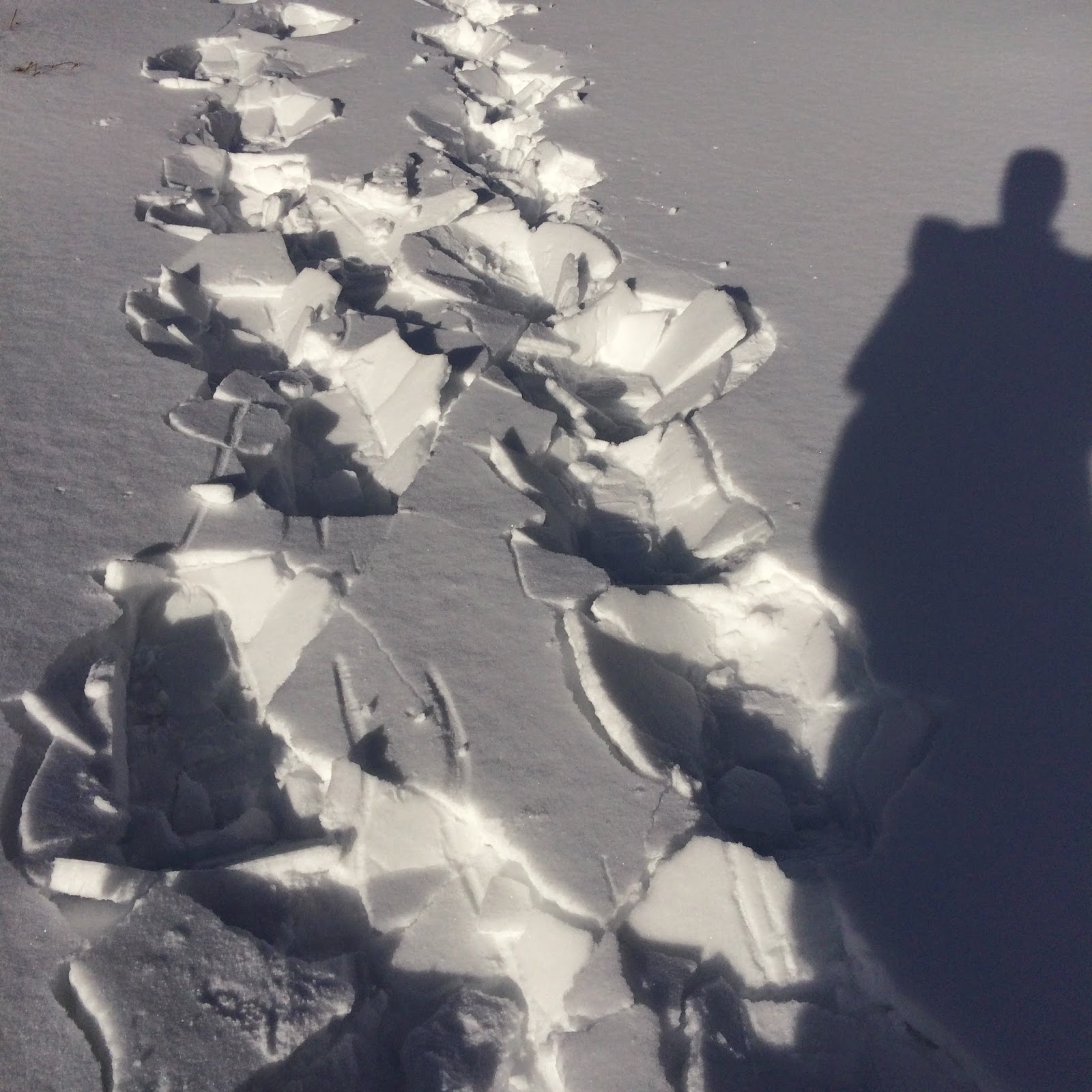 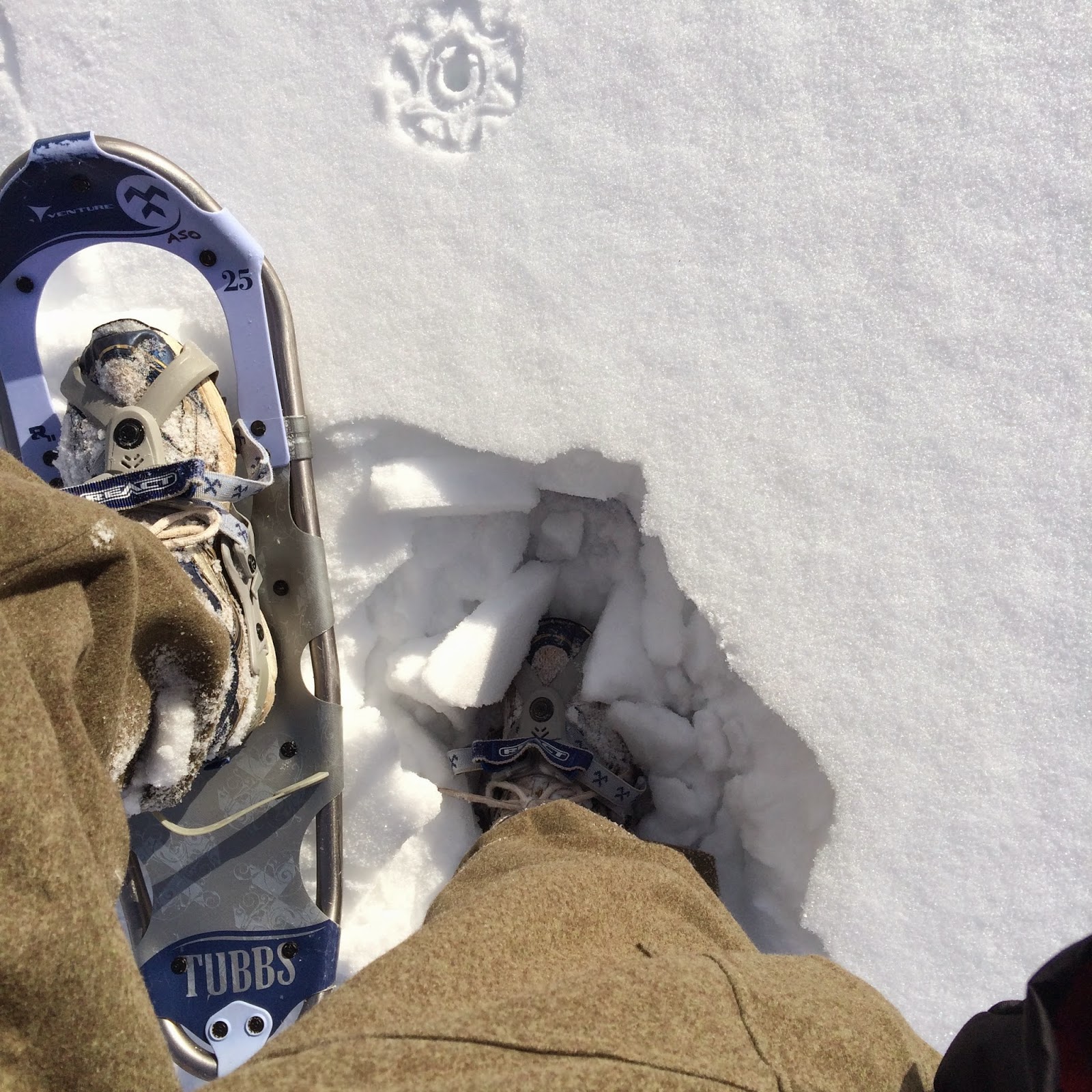 I don't own any waterproof shoes appropriate for snowshoes so I just wore my trail runners with waterproof sock on underneath.  That worked reasonably well the first day but not so well the second day as you will see.

The route we took stayed on the plateau with occasional vistas over surrounding valleys. 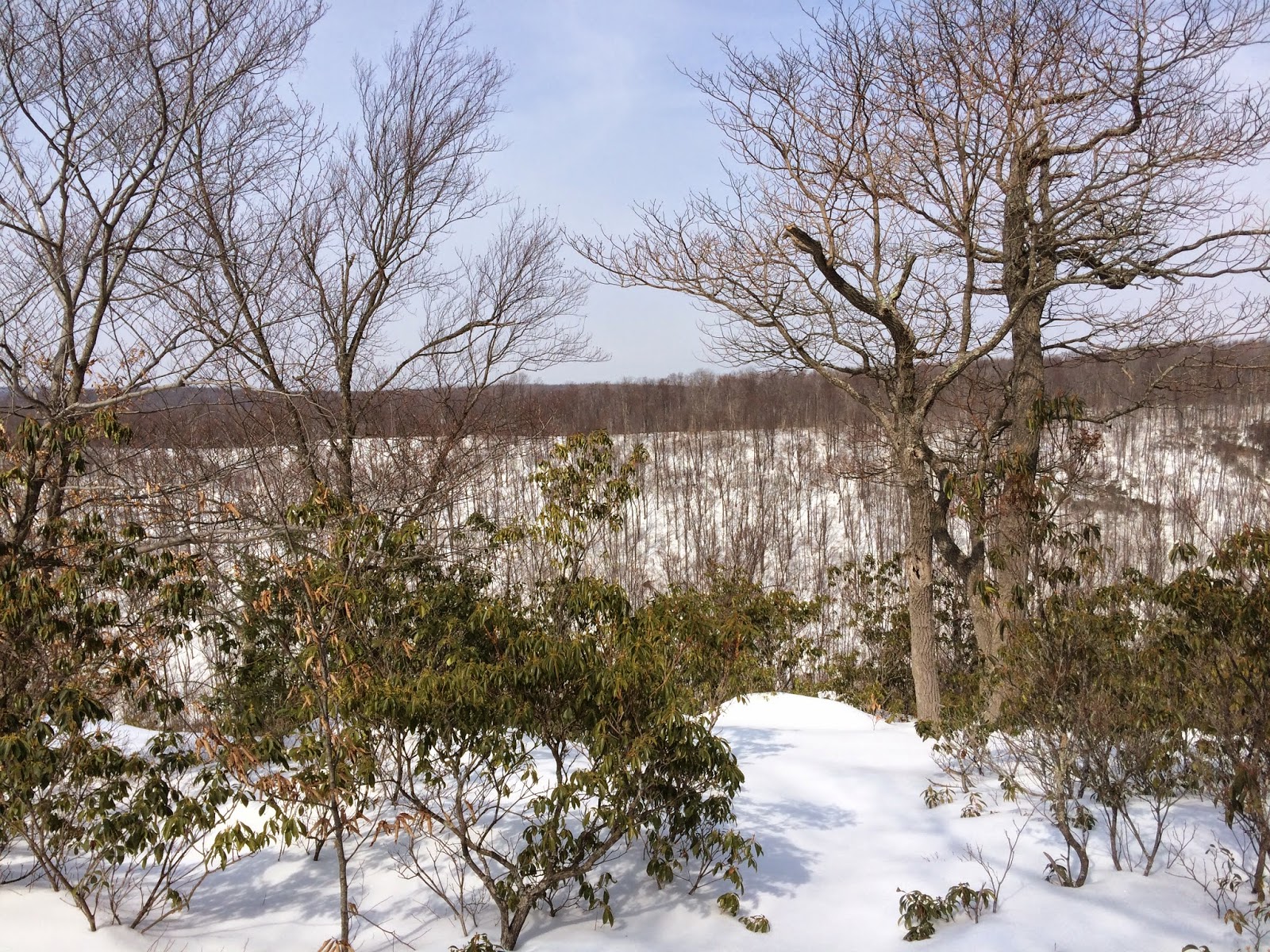 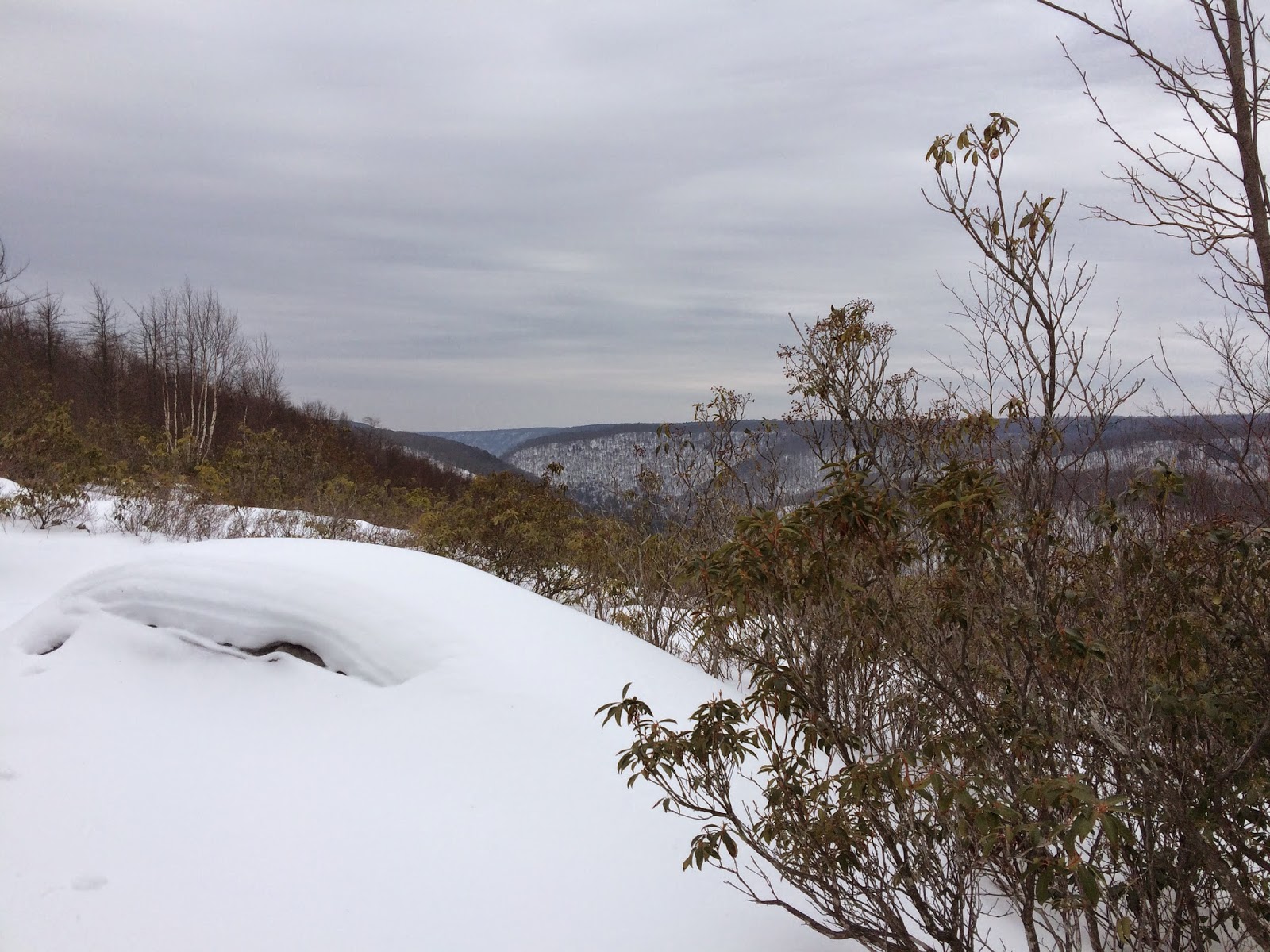 Unlike last hike, when I ran out of fuel, this time I had my trusty SVEA 123R which I've written about before.  Chris had his MSR stove.  Shug has recently compared these two on a hike.  Just as he found in that video the MSR puts out much more heat per unit time.  But I'm fond of my SVEA becaues I think it has character. 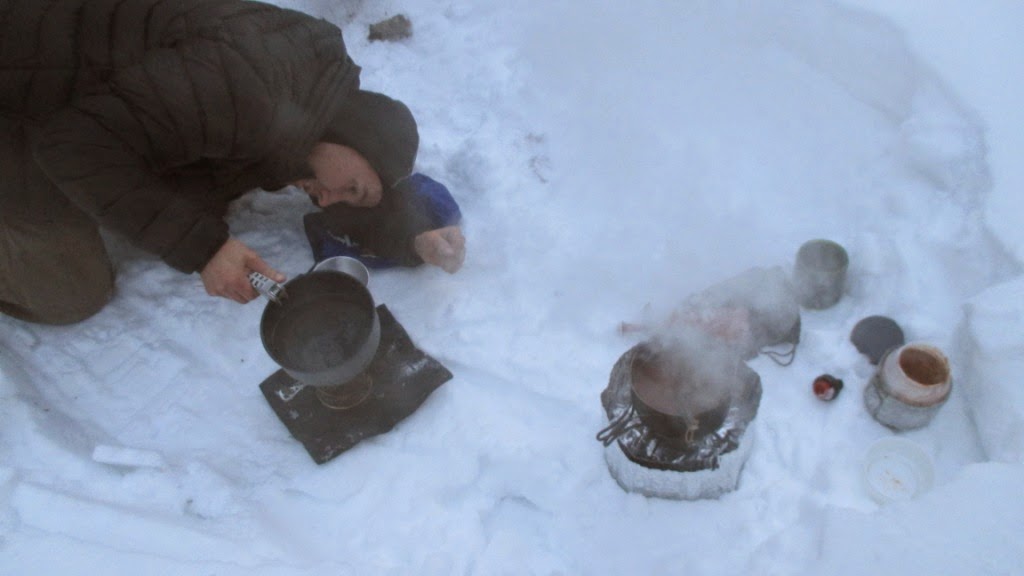 I slept again in my warbonnet ridgerunner hammock with a spindrift cover to keep out any wind or light snow.  No snow was predicted so I didn't even bother with a tarp.  For underquilt I have the 0 degree lynx underquilt that is made for the ridgerunner hammock.  Had one problem tho.  During the night my feet got cold and I reached down and realized that part of the underquilt suspension had failed and the underquilt was not attached on one corner.  It was in the single digits and I was afraid I would have to hike out that night.  But then I remembered that my west german army wook pants have, in each pocket, long ties which are loosely sewn in.  Some have suggested to me that they are there for makeshift tourniquets during war.  But this night I just yanked one loose and used to make a quick repair.  Only took a minute or so and after that I slept cozy. 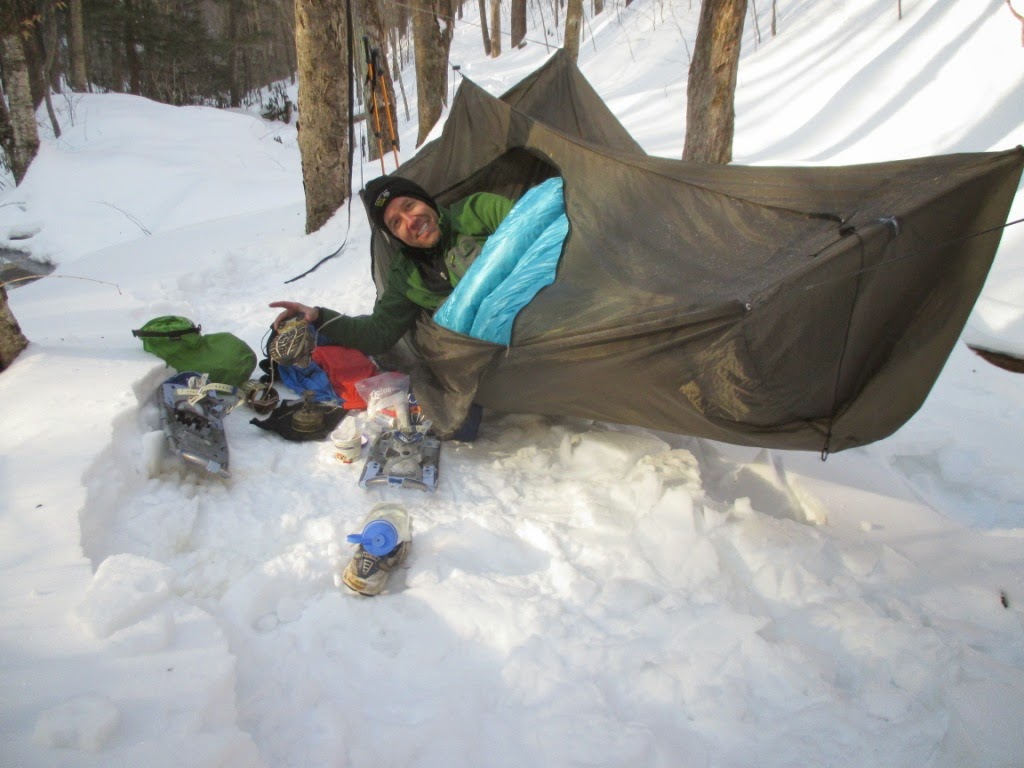 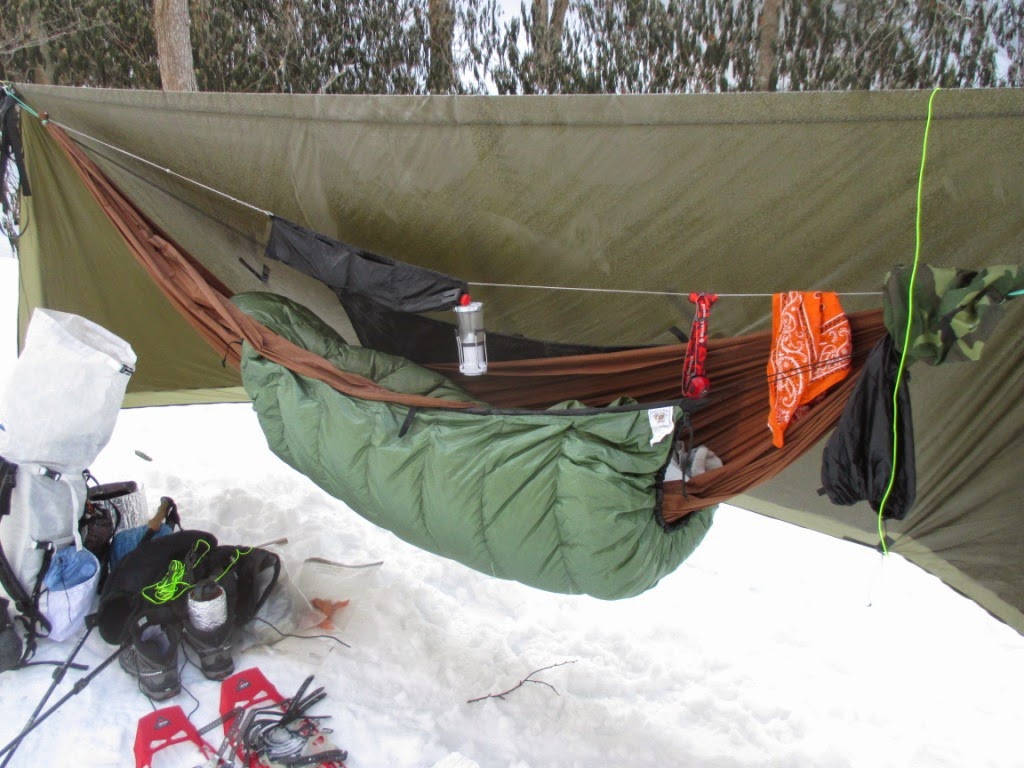 Chris uses a gathered end hammock.  His new model has an 11-foot length which he says is much more comfortable than the typical 10-foot hammock. 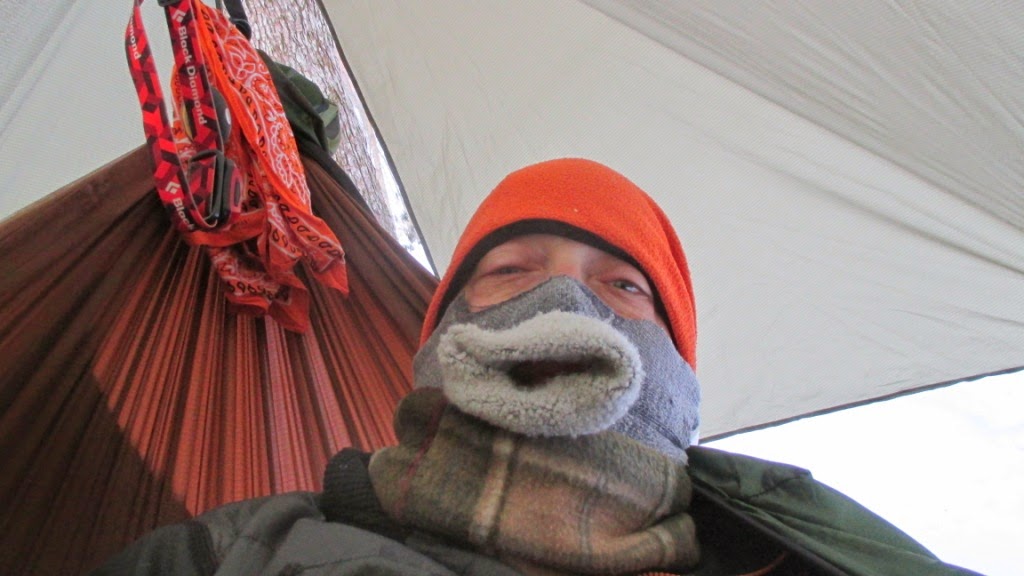 One of the challenges of winter camping is that you need to allow for ventilation (to prevent condensation and freezing) while also keeping your nose warm.  Chris invented this brilliant solution using a wool sock that he put a slit in the middle of.  He pulls the slit over his head and then the leg of the sock forms a kind of elephant trunk.  His mouth and nose stay warm even when it's cold.

In my spindrift I do have problems with condensation.  However at these temperatures it's easy to deal with because it the morning it's just like snow all over the inside.  If I turn it door-side down and shake it all the frost will fall out easily.

In the morning I had to deal with the fact that my shoes had frozen during the night.  So I fired up the SVEA from the hammock and used it to carefully defrost the trail runners.  One of the fun things about the SVEA is that to prime it in this type of situation is easy.  You just hold the cold stove in your warm hands (or bring it into the bag with you for a minute).  As the fuel inside heats up it builds up pressure so that you can turn the key and enough fuel dribbles out that you can light it and it will prime nicely. 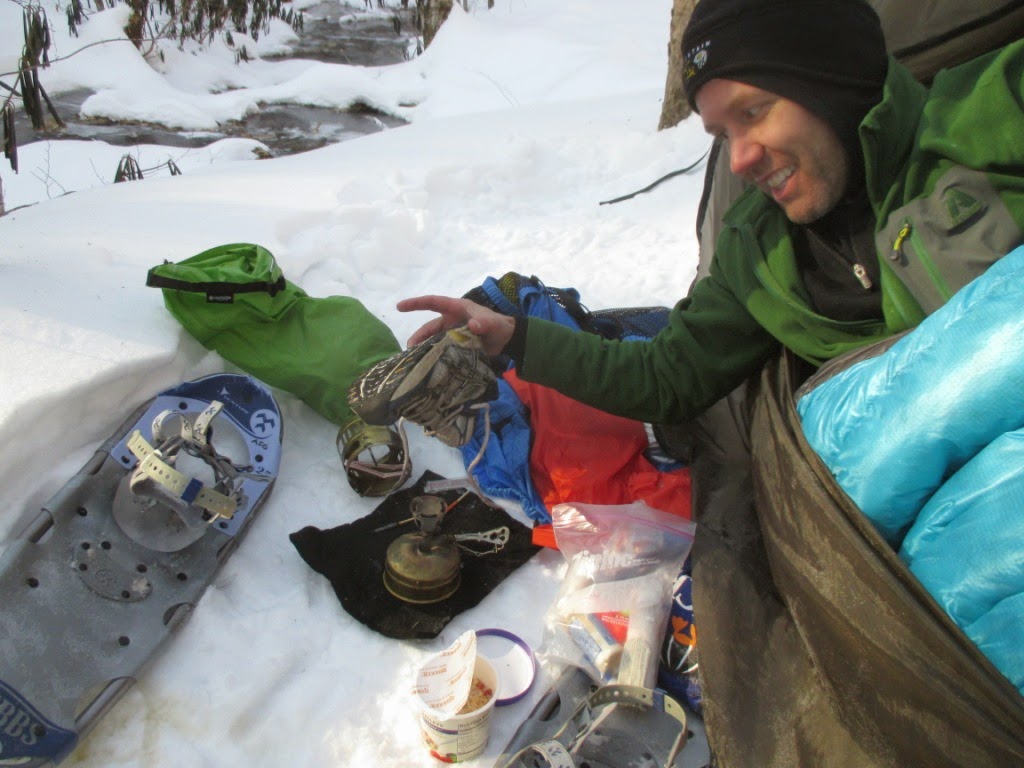 The hike out was a little difficult, just like the hike in.  But it was nice.  My legs were really sore by the end.  Snowshoeing uses muscles I don't often use I guess. 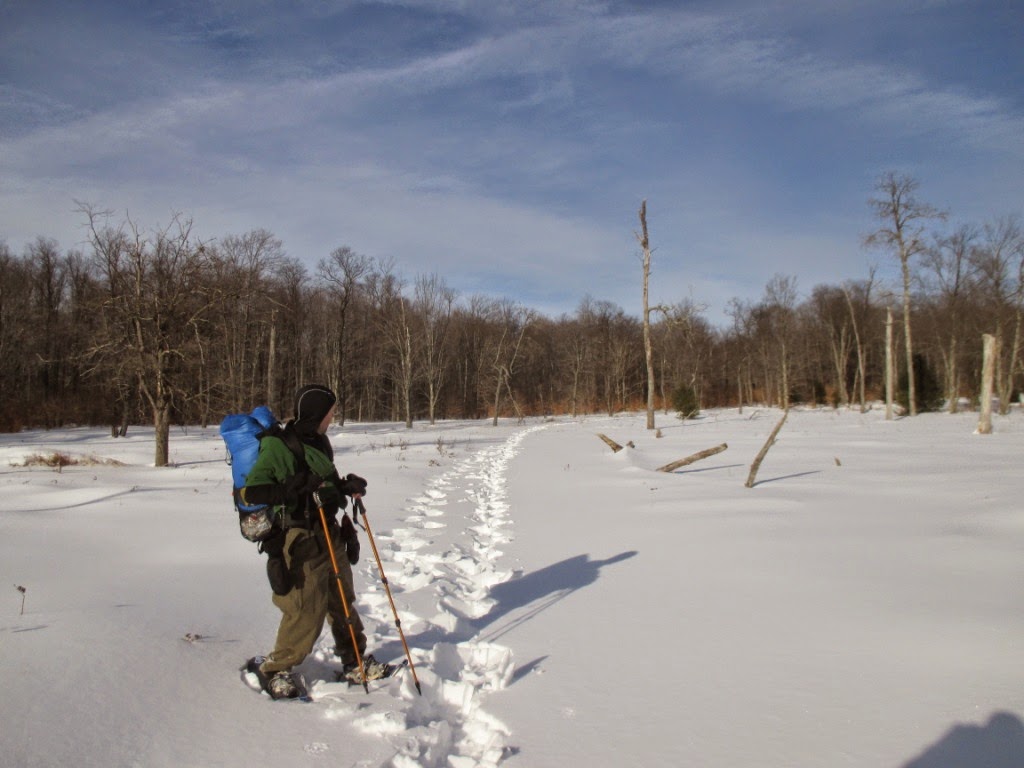 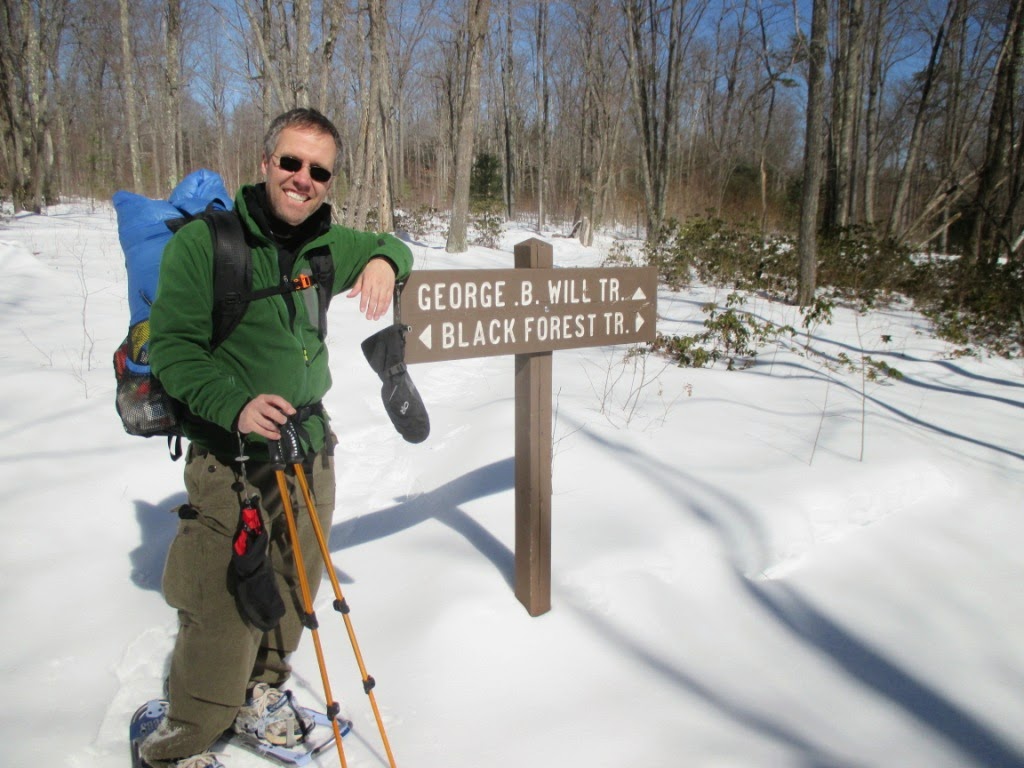 My Dad is nerdy...But still cool :) I want to go hiking with you when it's warmer.